While we’ve become quite use to ‘reimaginings’ in literature – especially in the classics, we very rarely get an honest to goodness reimagining mash-up, and even when we do, the mashing stays safely within one genre… It makes you wonder… can it be done any differently? Well, I guess Matt Ferraz had the same idea, because that’s exactly what he has accomplished with his work – Sherlock Holmes and the Glad Game. Below, I’m really happy to be able to share with you the book blurb and a guest post from Matt about his experiences writing Sherlock Holmes and the Glad Game. 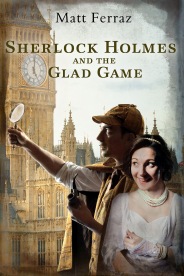 British sleuth Sherlock Holmes can solve any mystery from a small clue. American traveler Pollyanna Whittier can only see the good side of every situation. The only thing they have in common is their friendship with Dr. John Watson. When Pollyanna shows up in London with a mystery for Holmes to solve, she decides to teach the detective the Glad Game: a way of remaining optimistic no matter what. A dangerous – and hilarious – clash of minds, where these two characters of classic literature need to learn how to work together in order to catch a dangerous criminal.

The genesis of Sherlock Holmes and the Glad Game was a challenge I made to myself: pick two public domain characters that apparently have nothing to do with each other, and somehow make them work together. I’ve been a Sherlockian all my life, and wanted to write a book with the detective for some time. But who could I match him with? Other writers already crossed Holmes Jack the Ripper, Mr Hyde, Captain Nemo and so many others. What could I bring to the table that was new and fresh?

I was at a bookshop in my home town when I saw brand new editions of Pollyanna and Pollyanna Grows Up, by Eleanor H. Porter. Those were books I had never read, but knew the basic premise: a girl who always sees the bright side of everything no matter what. I had seen the 1920 movie with Mary Pickford, one of my favourite actresses, but remembered little of it. So I bought copies of those two books, and while reading them, a novel started to form in my mind.

No one had ever had the idea of putting Holmes and Pollyanna Whittier in the same story. After all, they’re so different! But my mind was made up: I was going to write a book where Pollyanna comes to London and assists Holmes and Watson in an investigation.

The one month first draft

People didn’t believe I could pull it off. In fact, my fiancée thought it was a crazy idea to begin with, but decided to give me the benefit of doubt. I wrote the first draft of this book in a month – faster than I had ever worked before! For that whole month, I was completely immersed in the story, having re-watched several Holmes movies for inspiration and re-reading big sections of Porter’s books.

My idea wasn’t simply to have Pollyanna ringing at 221b Baker Street offering a case for the detective to solve. I wanted to fit her in the Holmes canon as organically as possible. My book starts with Pollyanna becoming a good friend of Dr. and Mrs. Watson while Holmes was considered to be dead after facing Professor Moriarty.

Bringing the two together

Pollyanna is in London to see a special doctor due to an injury she suffered in her childhood – which is shown in the first Porter book. She eventually returns to America, but shows up in London two years later, when Holmes is already back from the dead, with a brand new husband and a lot of trouble on her back.

The best part of writing this story were the comedic possibilities in the interaction between these characters. I tried to avoid making Pollyanna too annoying and naive – she’s actually pretty smart and kicks a few butts. It was also nice to create a more humane Holmes, different from the stubborn and arrogant versions we’ve seen in movie and TV in the past few years. It’s a little, quirky and funny book I’m very proud of. 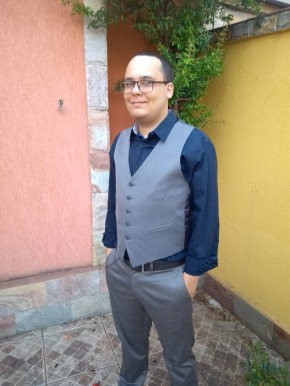 Click the links to go to his Amazon and Goodreads pages.