I luuuuuve me a little bit of Highsmith… The prose is so economic but oh so gripping. She creates truly hateful characters, in whom we recognise people we also may have held deep, 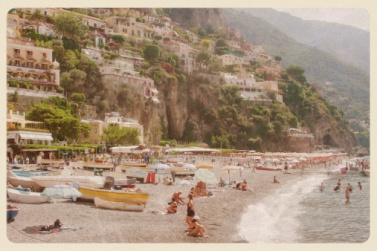 dark dislikes for, people we may have fantasised about ‘doing away with.’ For some, reading Highsmith is a kind of therapy, but for others it’s a master class in how to create teeth grinding tension with a satisfying conclusion. I’ve learnt a lot about writing just from reading Highsmith, but my favourite 5 of these….

Highsmith described the origin of her stories coming to her as a “germ of an idea”… that she would have some tiny small piece of inspiration and then have to grow it out until the story followed. This is an excellent way of seeing the beauty in a good book. All too often  popular books are created instead of written, and seemingly through an arrangement of ticked boxes. Hook – Push off – Tension – Relief. The self-help writing books also endorse this formulaic method, so it’s no wonder, so many books seem to be lacking the fundamental element of a burning idea.

Looking out down on to the beach at Positano at 6 am one morning, Highsmith saw a young man with a towel over his shoulder walking alone on the sand.

This was the germ for The Talented Mr Ripley. A single soul walking along a deserted beach at day break. Where had he been and what had he done?  Where was he going and to do what? My mind reels at the thought of the process that she would have gone through to ultimately arrive at Tom Ripley. Was he an American? He’d have to be – she was still a young writer and hadn’t started imaging foreign heroes. How did he get there? Was he wealthy – no that’s dull. How did he feel? How did she feel in this town of judging glances, where if you say you write you are compared instantly to Positano’s other onetime residents Hemingway and Steinbeck? She put her thoughts and feelings into this vessel and grew the oak tree that became TTMR.

I’m a big fan of this germ-theory 😉 When you get a twinkle in your head, you can turn it over and over for years before suddenly it becomes what it became.

2. Ignore the rest of the world…if in doubt throw you typewriter out of the window

When Howard Ingram goes to Tunisia to write a script in the ‘Tremor of Forgery’, things start going down back in the USA. A friend commits suicide and his girlfriend is probably having an affair. But Howard doesn’t get on a plane to dive right into what could have been

a different plot. He stays put. He starts working on a novel and as he waits for a letter from the girlfriend to explain what’s going on, he sorts out his plot and accidentally, possibly kills a man with a typewriter. Luckily this gives him lots of opportunity to explore feelings of guilt. In this example, I see the power of not following the expected plot line but rather fighting against it, letting it build and build until your protagonist is ready to tackle it. Because if we all dealt with our issues right away, we wouldn’t have any.

3. Write about what you know and if you find something you want to write about and have never done it…Do it.

In the Suspension of Mercy, Sydney Bartleby actually makes the lady next door suspect him as murderer to harness the feeling of being a suspect. He buries an old carpet, he acts dodgy as hell. The old dear ends up keeling over out of terror and pretty soon the cops really do think he’s killed someone. This fake body burying thing always struck me as something Highsmith actually did. Because she doesn’t skimp on the details, just as anyone who’s ever carried a drunk friend out to a taxi or tried to move a wardrobe knows, they are heavier than they look and the pure strain and fear of having either one halfway up the stairs and wobbling is enough to lead to blind panic.

I like to imagine Highsmith is heavy boots and a thick jumper, pacing around Montmachoux, pulling on a rolled cigarette, looking into damp wooded lots and “setting her jaw” as she would say, trying to work out if you could stash a body in there. I wrote a passage a few years back about someone fighting and being killed as he slipped down a set of icy  concrete steps in Stuttgart, Germany. The scene is set in a real place, the steps rise up between pre-war apartment building and cross two roads as a short cut. I saw them everyday from the bus I took to work and I kept telling myself, I have to get off the bus and stand at the top of those steps next winter to see if it looks as scary as I think it is. I was so thrilled when I was invited to a Christmas party shortly after and realized as I followed the map that I was at the top of the steps. I almost turned around and went straight home.

4. “You don’t write a book with your little finger.” -You’ve got to commit.

This is a straight dig from Tom Ripley about Marge Sherwood’s writing schedule. When Tom asks Dickie where Marge is, he tells him she is having a good day with the book and suggests that she is on a roll with her work. In the same breath he remarks that she might come along to the beach after lunch.

We all know this type of writer, faffy types (as my mother would say) who seem to spend more time at Nanowrimo socials than at home in front of the computer and we snigger with satisfaction when Tom makes this remark. However, we are all guilty of occasionally being this type of writer, so it cuts both ways. It says, I know what is needed of me to be satisfied with my writing efforts and I am still not doing it, not always. This is a very important lesson from Highsmith and one which I hear in my head whenever I switch off the computer to read an episode of The Killing (I haven’t quite mastered Danish yet

In Plotting and Writing Suspense, Highsmith shares with the reader her failings and talks about the stories that never got published. While trying to put the idea out of my head that I should immediately rush off to the archives in Switzerland (kidnapped publisher in tow) and demand to see these silenced masterpieces, I am reminded that if Highsmith was able to shelve her failures definitely I should be able to do so too. I spent 7 years on and off trying to write one particular novel that contained my own alter-ego. He became so diluted by all the experiences I imagined for him that he was almost translucent at the end. I recently had some boxes sent over from the UK and found reams of pages of the same-same but different chapters. Literally years of work… for nothing. However, my first impulse was to write it again…. properly this time!

Highsmith would give herself 20 opportunities to publish a story and after the 20th rejection she would take “a few days” and then start fresh. With this in mind, I resealed the box and put it back in the wardrobe to try to forget about it. Of course I failed and spend 10 whole days over the Christmas break,  rewriting it, 14 hours a days, for no reason. After all – just because I’ve learnt the knowledge from the master, doesn’t mean I mastered it myself.