Book Review: See What I Have Done by Sarah Schmidt

In this ambitious imagining of the Lizzie Borden case of 1892, Sarah Schmidt fleshes out the conclusion, which was always assumed, but never proven. The case was a national obsession, when a 30 year old live-at-home daughter from a nice town in Massachusetts axed down her father and step-mother, because famously, the jury decided, a woman was not capable of such a crime. 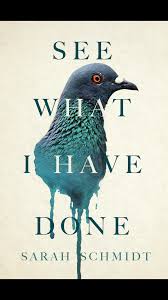 Looking back at the story from a true crime angle, there was very little for Schmidt to build on. Facts like Lizzie owning pigeons, burning her dress, her considering purchasing Prussic Acid the day before etc. are oft repeated in the Lizzie Borden files but there’s only so much you can do with these bones without creating melodrama. So it was a pleasure to read Schmidt’s take on the emotional and mental state of the presumed killer.

In a Venn diagram of the Lizzie Borden of this book and the real Borden, the circles are probably a good mile apart. The Lizzie we find here is a bouncy woman-child, manipulative and psychopathic and doesn’t ‘look’ much like the black and white photos of the frizzy haired Borden. I always imagined Borden as a cold and calculating killer, someone at the end of her tether, who had just enough distance from herself to hope she wouldn’t be suspected. This is Borden re-loaded, licking droplets of blood off her hand like a cat, laughing hysterically within sight of her murdered step-mother and without much mention of the trial, getting away with it.

As a psychological thriller, it certainly delivers. Schmidt makes Lizzie easy to hate and despise while we root for her sister and the maid throughout. The story is really well built up to include possible motivations for murder from both the maid and a hit-man, but of course, the reader never entertains these as prospects unless we consider that Schmidt intends to derail the story. Of course, Schmidt doesn’t need to tell us, Lizzie did it, but she did need to land the story and she does this well and as stylishly as would be possible. However, because a few ‘red herring’ threads were started to build the story, it would have been nice to have seen these land satisfactorily too. I was a wee-bit miffed that Bridget didn’t get her tin back or than the story ended before the hit man gets into Lizzie’s new house.

One word of advice, don’t let the awkward first few pages distract you. I didn’t know if the maid was meant to be Italian, Caribbean or what when I first started reading and I assumed she was around 60 and that Lizzie was meant to be 14 (for some reason). I did nearly close the book but I’m so glad I didn’t. The maid is 26 and Irish. Lizzie is her real age of 30. JSYK.

This is well-written, meaty, authentic feeling, page-turner of a book and I lost a few hours to it when I should have been sleeping. I imagine, if you knew nothing about Lizzie Borden, then this book would be an even better read. But either way it is a good one.