After reading SAIGON DARK last month, I reached out to Elka Ray’s publishers at Crime Wave Press with some interview questions, and was amazed at some of the replies I received. As readers, we get used to authors reaching deep to bring our innermost fears to the pages of their books, but we don’t often expect them to come from real life experiences. However, Elka Ray’s Saigon Dark is anything from the usual…

LISSA: In Saigon Dark, a really unusual drama creates a platform for exploring, among other things, issues of trust. Did you decide on the plot first or draw the plot around the themes?

ELKA RAY: Ten years ago, my first daughter died as a baby. It was a total shock. I’d believed my child would outlive me. Instead, I was cremating her. How could this have happened? Why her? Why me? Was this a punishment for my failings and mistakes? I had all sorts of crazy thoughts. The trauma of her death shook my trust in the world. I felt unsafe – like a door I didn’t even know was there had opened and couldn’t be shut. If this unthinkable thing had occurred, more bad luck could follow.

Without trust, we can’t function normally. We trust other drivers to stop at red lights. We trust the food we buy is not poisonous. We trust our friends have our best interests at heart. Most importantly, we trust ourselves to make reasonable choices.

When you doubt yourself, you’re lost. You can’t trust anyone or anything else. This was the starting point for Lily Vo, the main character in Saigon Dark. I wanted the novel to explore grief, trust and paranoia.

The plot centres around passing one child off as another. This idea came to be shortly after the birth of my son, whose first passport photo was taken when he was three days old. He was squinty and bald – indistinguishable from most newborns. That passport was valid for five years, which gave me the idea: it could be used for almost any kid.

LISSA: You chose to make the main character a Vietnamese woman who was born and raised in the US. Did this allow her to behave differently or be more identifiable to non-Vietnamese readers than a native, or is her background incidental to the story?

ELKA RAY: To make Saigon Dark work, I needed the main character, Lily, to be as isolated and stressed as possible. Her marriage to a local man has just broken down. She’s a single mom in a foreign country. Her youngest child is unwell. She has no real friends nearby. She’s leery of the police and feels judged by the locals.

This story wouldn’t work if Lily trusted the authorities. It wouldn’t work if she had family nearby. Someone with a strong support network would get help. They’d make less desperate choices.

When I first heard Lily in my head she was American Vietnamese – and that worked perfectly for the story.

My husband is Australian Vietnamese. Some of my closest friends are American Vietnamese. In Vietnam, Viet Kieu (Overseas Vietnamese) face special stresses compared to other foreigners. They often come here expecting to feel “at home” only to experience profound culture shock. Many local Vietnamese don’t understand that culture is learned – not passed down in your blood – and judge Viet Kieus for not speaking fluent Vietnamese and behaving like natives.

With suspense, your goal as an author is to keep adding pressure and building tension throughout the book. You’re stacking the deck against your poor protagonist to test how strong they can be.

LISSA: Your previous work include kids and more mainstream fiction. What tempted you over to the dark side? And most importantly, are you staying?

ELKA RAY: My first novel, Hanoi Jane, is a romantic mystery. It’s light and funny – a book about a young woman rebuilding her life after a bad break up – but there’s still a crime at its core. And my short story collection, What You Don’t Know: Tales of Obsession, Mystery & Murder in Southeast Asia is packed with crimes and ill will. I’ve always been fascinated by why people behave like they do, especially when their actions seem unreasonable. Crime fiction is about motivation – and that’s crack for me.

Many thanks to Elka and Henry Roi at Crime Wave Press for the interview!

UPDATE: This book is on an Amazon 99c deal Sunday 19th March and Monday 20th March.

The premise – that a single mother (Lily) living in Vietnam decides to ‘rescue’ an abused child who wanders out in the night on the same night as her child of the same age drowns, and then deals with the consequences – doesn’t do the story justice. It’s a tale of motherly love and how it effects the most sensible, well educated and grounded of us all as an obsession and compulsion. It’s also an account of the fragility of human relationships in matters of trust and romantic love and how ‘blood’ or in this case motherly love is thicker than water.

I don’t do stars, but this book is an easy 5. It’s the best new fiction I’ve read this year (okay, it’s February), but it is still an excellent novel. Saigon Dark is best enjoyed if you have no idea what’s coming. So I won’t get too much into the plot. The best I can do is to compare it to some other well-known books to give an idea of the style and quality.

One such would be Daphne du Maurier’s Rebecca, in which the story starts off as a romance then veers towards the supernatural before becoming a full-on psychological suspense novel. Likewise, Elka Ray’s Saigon Dark starts off as a story of a woman wishing back her ex-husband, then becomes a little spooky, turns into a tale of a woman living under the constant pressure of lies and then explodes into a classic noir romp full of secrets, blackmail, and murder. Elements of Ray’s story also had the feel of Patricia Highsmith’s, The Talented Mr. Ripley, in that occasionally, the pose becomes quick and economic, rushing through Lily’s intensely focused actions of dealing with dead bodies and the fear of being discovered. There’s also the tense but stylish management of lies and the evolution of Lily into a new person, completely at odds with her previous or professional self.

There are many themes here that will appeal to a wide range of readers. Throughout the book, a thread regarding trust is present. Lily can only trust herself, she has to compartmentalize everything she feels in order to protect herself and her children. There are also ideas of rebirth and renewal and the hope of making something better. Ultimately, there is sadness and tragedy to the story, but it is not of the soppy, anti-climatic variety, rather a more sensitive and empathic approach to noir. And all this wrapped up in a fascinating Vietnamese location and culture that reads as genuine and authentic.

There’s no way this book can be easily described – well written and fascinating subject matter is only the beginning. It could easily become a huge hit and also has all the hallmarks of a noir classic. It should be read, simple as that. 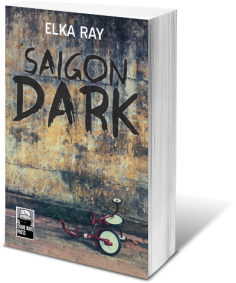