This book came out last year and quickly garnered the kind of newspaper reviews which a certain type of person will find intriguing.

Here, our hero is a fraud, a grand fraud. He publishes books written by his wife. He has affairs with women out of vanity. He has a dubious past and may or may not have killed his parents.

So far so good. 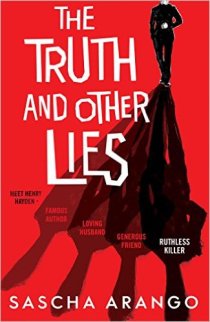 The Guardian Round Up described the main character, Henry Hayden as a Tom Ripleyesque anti-hero (oh be still my beating heart).  The NY Times Review name dropped Gillian ­Flynn and Paula Hawkins, who for a short spell, had both been hailed as a new Patricia Highsmith.

The author himself is Sascha Arango, a German play write.

Is he good? Yes, he is – very good. His writing is clear and concise and the story flows. Is he Highsmith – good? Is Hayden, Ripley – good? Don’t be silly.

As The NY Times review goes on to say… and I paraphrase… Henry Hayden is a sociopath, but whereas The Talented Mr. Ripley is a creature of ambition and anxiety, Henry Hayden is barely self-aware. His dishonest, good fortune, which raised him up from nobody to famous author, was not by his own design. And sadly there is something less magical about a character who – to put in Seinfeld terminology – “falls ass backward into money”.

However the story develops well, the web gets stickier, the police get closer… surely, he’ll never get away with all this!

Without giving away any spoliers, I’ll just say. The climax of the story came and went with me still expecting a grand reveal. So, it was a very, very good book. But sadly, it missed that magical, full on, panting in satisfaction ending which his wonderful writing had made me expect.

Oh well. Like they say, when pizza is perfect, it’s really, really good and when it’s not perfect, it’s still damn good. This book is the second type.